You can play CoronaBird by clicking here or on the image below. 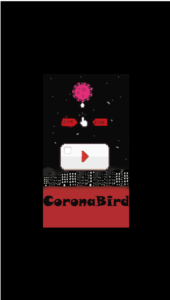 Nabil Hussein is a student at LaGuardia Community College, where he is currently pursuing an Associates Degree in New Media Technology. Nabil uses his animation, video editing, and photoshop skills to bring his game designs to life. For more of his work visit his itch.io and GitHub pages or follow him on Instagram at @nabilalderi.

Raymond “Ray Rav” Louther is a Film Director and Music Producer from East New York, Brooklyn. After falling in love with music at a young age, he transferred that momentum into becoming a filmmaker at the age of 18. Ray Rav started off with filming music videos, but now he also does a lot of short films. He’s often called “The Jack of All Trades” because he does his complete production by himself (directing, cinematography, editing, special effects, lighting, audio, etc.). Growing up, his biggest influences were 50 Cent, Eminem, and Dr. Dre. He truly admired their leadership and originality, but he fell most in love with 50 Cent’s dominance from music to film. With a very driven and ambitious outlook on life, Ray Rav is ready to succeed and make it through any obstacle in his way. The sky is his only limit! You can find him on Instagram @Ravage_Music.